I downloaded the trial copy of the latest version of Microsoft Office--2013. The download was quick and the install uneventful. I was surprised it left Office 2010 installed and active.


Before you get too excited about this new version, know that it only works with Windows 7 or Windows 8. If you have XP or Vista, be happy with versions up to Office 2010.
There are some other requirements as well, but everyone with 7 or 8 probably meets them. Your  machine needs at least a 1GHz processor, 1GB of RAM for the 32-bit version (2GB for the 64-bit version), at least 3GB of free hard disk space, and a graphics card that can provide at least 1,024-by-576 resolution.


Word looks a lot like 2010 but with better graphics in the ribbons. Like 2010 it has a File button and you really can't see much difference as you use it. It is in the features available that Office differs from other Word Processors. Typing a document is just as easy in Office 97 or even using Google Docs or OpenOffice.

Features in Word 2013 that really stand out. 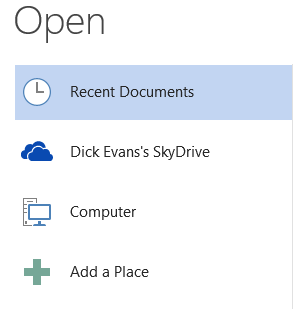 Direct access to the Microsoft SkyDrive. You can open and save documents to you Cloud storage which is free from Microsoft for 7 gb.

The ability to open and edit a PDF file. You can modify it and save the update as either a PDF or a document file. 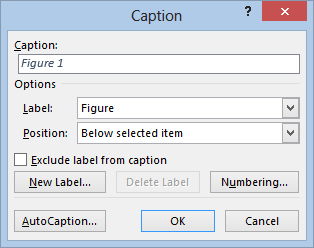 Right clicking on a picture has an option to add a caption to the image.
As I use it more I will report on any additional features that pop out at me. And I will spend some time with Excel and PowerPoint.

What about the trial version of 2010?
It is available at http://bit.ly/rKNRSK for all versions of Windows. Or you may have gotten a free Office Starter 2010 with your new computers. 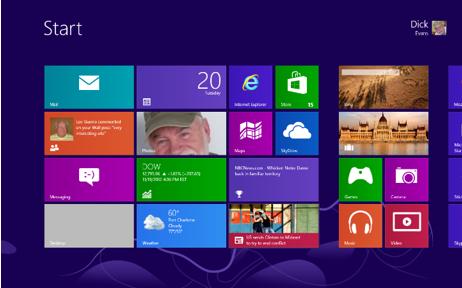 A new operating system is here!

The first thing you notice is a cell phone looking interface. Although designed for touch screen access, you can still use your old monitor and a mouse. The old desktop is missing. No start button. This is a drastic change! Don’t panic, everything's not as it seems. If you have a brand new computer with a touch screen, you can use your finger to move the screen and call up apps much like you can with a smartphone. But, your mouse still works and if you click the desktop icon you are taken to a familiar screen.

●     The start button has been removed. Hidden is a hotspot in the lower left corner of the screen that opens the Start screen, a multi-screen interface replacement for the Start menu.
●     The Show Desktop button has been removed from the taskbar. Hidden as a hotspot in the lower right corner where it was previously located.

Added in Windows 8
●     Windows 8 has short boot times, because it saves the kernel's memory to the hard disk on shutdown (similar to the existing hibernate option) and reloads it on startup.
●     Windows 8 is said to have better performance than Windows 7, even with the new interface running on top of a desktop...

Taking the Plunge into Windows 8

I decided to take the plunge. I have a Dell Inspiron 1525 running Windows 7. I went to the Microsoft download site and clicked on the $39.99 pro download available until January 31, 2013. the first thing it did was spend about ten minutes checking my machine for compatibility. When that section finished it asked if I wanted to keep my settings, files, and apps, or just personal files, or nothing. I picked the first option.

Time to pay for it. You can get the download for $40 plus a DVD for $15. You can use a credit card or PayPal. After accepting payment it displays the product key and emails a receipt.

Next the 2gb download begins with an estimate of 1 hour+ to finish. My machine was running 32-bit Windows 7 Ultimate. It is a dual core Pentium @ 1.86GHz with 4 GB of RAM. And a small 160 GB hard disk drive.

That download took almost 2 hours so I decided to wait until morning to continue. When I rebooted there was an icon on the desktop to get back into the next step in the install process.

This was the same screen I had ended up on last night. There were two options I could take. the first would simply do the install. I chose the second which created an ISO file which allowed me to create a bootable install DVD, This took about 10 minutes.

I pushed the DVD back in and restarted from it. After a minute or two, the Windows 8 Setup screen appeared. I left the US defaults and clicked Next.

The next screen allowed me to either Install Now or Repair. I clicked the install option. I assume the Repair option can be used later to fix otherwise unresolvable issues.

Next it wanted the product key I had purchased and had written down. I keyed it without the dashes and clicked Next. After a couple of minutes I checked the box to accept the terms and clicked another Next button.

The next screen was very important. The Upgrade option keeps all the existing files, settings, and apps. The Custom option just installs Windows 8. I was careful to choose Upgrade.

It had me remove the DVD and restart. I was warned to not select the custom option on the restart. The tricky part was to let the old Windows 7 start normally and then push the DVD back in. When the selection screen pops up, select the upgrade option.

Read the screens carefully without making assumptions. I messed up a couple of times and had to restart the install process.

It takes a while to do the install. It asks for you to setup a log-in password, which I do suggest even if you are the only one to use your machine. Then it asks for your Microsoft email address and password. If you do not have one, register for one as Windows 8 is closely coupled with Sky Drive and other Microsoft cloud items.

That was all there is. Windows 8 booted. Everything worked. The desktop (Win+D) looks just the same as it did with Windows 7. Now I just have to get used to the new Start Menu to take full advantage of the new features. While I am doing that I can get right back to the old desktop view at any time doing whatever I was doing before 8.

More notes coming in the near future as I play with 8. Take the plunge and be one of the early adopters. The price is right!
at 6:20 PM

Dick He has authored a number of books over the years, both in his computer profession and in the ministry.

Now retired, he volunteer teaches computers at the Port Charlotte, FL library and at a computer club in Port Charlotte and helps people with their computer issues. He is Vice President of that group.

In addition to his own blogs, Dick writes articles for Dave's Computer Tips

Dick was on the full time faculty at Rhode Island College as an Assistant Professor from spring 2005 through summer 2009. Previous to his full time position, he was an adjunct professor at Rhode Island College since 1986 teaching a number of computer related subjects. Prior to that he taught Programming at a technical school in RI. He has been a Ham Radio Operator licensed since 1957 as K1CVP